Masterpiece Multimedia services in Malvern, Havertown and Limerick, Pa can transfer your movie film to DVD by converting from 8mm, Super 8, Super 8-Sound, 16mm, 16mm-Sound and Super 16mm. Our machines are high definition frame-by-frame capture devices that can accept both positive and negative film. The film must be developed. In our 15 years, we have transferred 1.5 million feet of film!

The film projector market has been closed down for quite some time now. Playing films on aged projectors can rip, burn or destroy them, as both the projectors and films have aged. Our silent transfer machines have no sprocket reels and use cool-to-the-touch LED lights. Films are not projected, they are lit, and high-resolution pictures are taken of every frame of film. We are here to help guide you through the transfer process. You will receive your film back just as you give it to us. The transfer of these films is captured in a computer. The original output from the computer is an .MOV file. It can be in high definition or standard definition. From there we can give you these files, convert to other file formats or make standard-definition DVD or high- definition Blu-ray. Raw JPEG image sequence files are also available. If these options are confusing, don’t be alarmed; we will help you choose the right option for you. Our prices are based on a combination of film type as well as length and volume. Because there are so many variables in pricing, it is best to give us a call.

Our film transfer services include transferring from the following formats:

I have a bunch of film, but not sure what's on it; could I preview it before transferring it?

Unfortunately, we are unable to view the films without transferring them. We use specialized machines to transfer the films.

My film is a bit dark; can you brighten it for me (enhance)?

Our transfer machines are very sensitive to light.  Because we are not projecting the film we are able to control the light values as the film is being transferred. We make adjusmtnets to the capture as best as we can.

How good of a video am I going to get back?

Our machines are frame-by-frame digital captures of every frame of film.   All captures are done at 1080p in High Definition.  High Definition or Standard Definition files are created based on the customer’s needs.  Quality of the transfer is incredible compared to the projection methods we used 15 years ago.

Do you clean the film before transferring?

Although film cleaning is available, we typically do not attempt to clean old film.  Some films are unable to withstand the process and can be damaged in the cleaning process.  Because of the method we use now to capture the film, dust specs are not as noticable as they were when projected.

I have film with audio; can you transfer this?

Yes!  Super8-sound film and 16mm sound film can be transferred with sound.   Our transfer machines use sync technology to capture the sound with the images.

Once your film is transferred, they are in digital file format and are completely editable.

I want to add titles before each film, but not sure of all the titles; what can I do?

Yes, in fact we add titles and chapter markers at no extra charge. If you are unsure of a title, you can stop in once the transfer is done to see what’s on the film.

What is the cost? Any volume discounts?

The cost is calculated by the foot.  The type of film, services requested and price breaks for volume of film will be factors in the cost.  Please call us for details.

There are blank spots in the film; will I get charged for those?

No, leader film and large areas of film that are blank are not counted in cost. 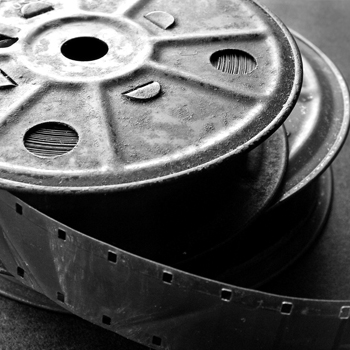 16mm film was introduced by Kodak in 1923. 16mm film can be identified by using a ruler and measuring 16mm across the film. Silent film will have sprocket holes running up both edges of the film. In 1969, there was a variation of 16mm film called Super16mm Film. It was mostly used in Europe at the time and had only one row of sprocket holes to make room for a larger frame of film. Our capture of these films is frame by frame in high resolution.

16mm sound film was introduced in the late 1930s. It took some time to become popular, as new types of projectors and cameras needed to be manufactured and sold. The commercial application of this did take some time as optical audio tracks were added to the film. You can identify this by looking at the film and seeing sprocket holes going down one side and a visual audio track strip going down the other side of the film. We are able to sync the audio with the visuals that are still captured in high resolution. 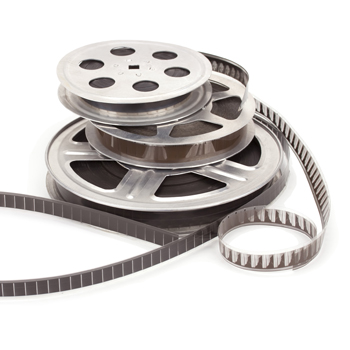 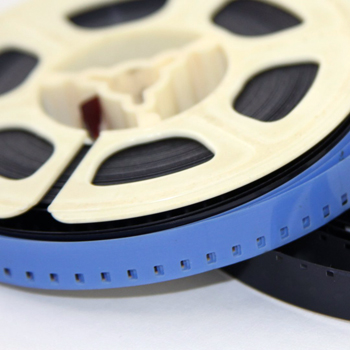 There are two versions of 8mm film: Standard 8 and Super 8. Standard 8, most commonly know as 8mm film, was developed by Kodak in the great depression as a less expensive consumer option to 16mm film. It was released in 1932. It can be identified by using a ruler and measuring 8mm across. It will have sprocket holes going down one side of the film. Super 8 film was introduced in 1965. The film is the same 8mm across, however the sprocket holes were made smaller, allowing for a larger, wider film frame. If you are unsure which one you have, no worries! Our machine accepts both, and the transfer cost is the same. We will figure it out. You may also have cartridges called Polavision. This is Polaroid’s version of Super 8 film. We are able to transfer this, however, we must take the film out of the cartridge. All of the 8mm films are captured frame by frame in high resolution.

In 1973, Kodak released its newest version of Super 8 film to include sound. It added a magnetic strip onto the inside of the film opposite the sprocket hole. An audio recorder was added to the cameras, and an audio player and speaker were added to the projectors. We are able to transfer the sound from these films and sync them back up to the visuals that are still captured in high resolution. 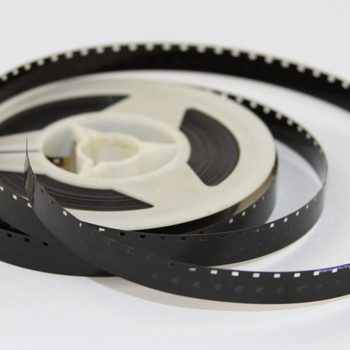 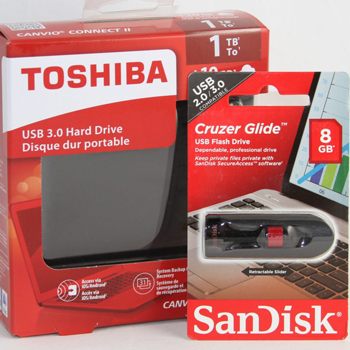 For Your Convenience We Sell Flash Drives & Hard Drives

When creating files, as a convenience to our customers, we offer flash drives and Toshiba hard drives available for purchase at less than MSRP. However, you can provide us with your media storage drive at no extra cost.